We work with Syrians since 2015 to provide quality rehabilitation care to the ever growing number of people in need of assistive devices.

OUR APPROACH is to educate practitioners who are already on the job in providing prosthetic and orthotic services to people with disabilities in Syria and Syrian refugees along the border in Turkey (Reyhanli), to build the critical mass of urgently needed professional cadre capable of providing quality services. People providing services now do not have any training to do so. They learned the craft by doing, out of necessity to help the increasing number of patients. The services offered are far from reaching the international quality and quantity standards, to the detriment of people whose lives depend on these services.

Since 2015, we collaborate with the National Syrian Project for Prosthetic Limbs (NSPPL) and sequa gGmbH to educate and train local people who will not only be able to provide quality services to people with disabilities including cases with complex pathologies, but who will also be trained to train others in the profession and so increase the number of trained professionals capable of providing P&O services to Syrians. With that, we want to achieve a multiplying effect – each trained professional will be able to introduce newcomers to the profession and thus create a greater pool of practitioners who are able to treat patients.

Since traveling to Syria for our international experts was not possible, we have developed a fruitful collaboration with Ankara University, where we organize all practical onsite activities in the program. In that light, 4 of practitioners from Turkey are also participants in the program.

What we have achieved
From 2015 to 2017 a group of 14 Syrian practitioners studied in our blended learning program for qualification on the international Category II level (P&O technician level). In November 2017, all of them passed their practical and theoretical exams in front of an international committee of examiners. The experts in the examination committee were impressed by the performance and engagement demonstrated by the participants, which they understood was also due to the number of patients they see on a daily basis, as well as keepin 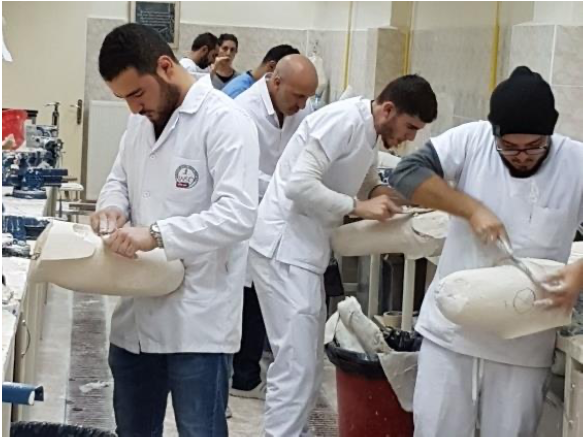 g the interests and benefit of the patient permanently in focus.

All of our graduates work in service provision centers where people in need of assistive devices from Syria are treated. Some of them live and work as refugees in Turkey, on the border to Syria, some of them live and work in Syria. They are very valuable to the Syrian people, since now, as qualified professionals with improved skills and knowledge, they are able to treat more patients, provide a greater range and better quality services, and serve as trainers for newcomers in the profession. One great example of such knowledge transfer is one Syrian graduate who provides support to his colleagues in a clinic in Damaskus, sharing his knowledge and skills with them. Another Syrian graduate started working in a health center in Turkey, where, as the only Syrian, he supports his Turkish colleagues in treating Turkish and Syrian patients. He reports that the skills and knowledge he has acquired in this program are much needed in the region.

NSPPL has taken action to multiply the effect of this project by recruiting a number of trainees in Reyhanli and in Syria for whom the most successful graduates of our program will serve as tutors.

by Emina Schlierf
0
September 7, 2021
Educational Projects for the World Our Work