From Syria: The following story was written by our student Abd al Mowla in 2016 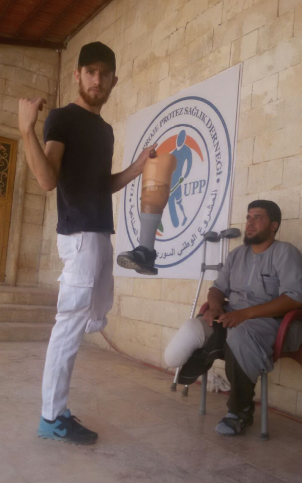 Abd al Mowla standing on one leg while treating a patient

“My name is Abd al Mowla. I was born in Idleb City, Syria, in 1996. There was a time, not so long ago, when I dreamt of becoming a mechanical engineer. I love to draw. I wanted to draw machines; I wanted to learn about how everything functions. I wanted to create new things. One day in September 2012 changed my life forever. I was 16 years old.

On that September day, my parents, my sister, my two brothers and I were travelling in our pickup truck from Damascus to Idleb. My brother Ahmad was driving. Close to Homs we ran into an ambush. They opened fire on us and two other vehicles. Ahmad stepped on the accelerator as the machine guns rattled a storm of bullets across the road. The car in front of us escaped unscathed. Our car and the car behind us were not fast enough. My brother and I were hit by the bullets.
We reached the hospital in Homs. My brother’s injuries left him with paraplegia. My injuries launched a hospital odyssey filled with surgeries and interventions first in Homs and Atma in Syria, then in Reyhanli and Antakia in Turkey, and finally in Ankara, where I was hospitalized for two months. Surgery after surgery the doctors tried to save my leg. However, the gangrene had set in and my left leg had to be amputated above the knee. After the amputation, I was sent back home to Syria.
Four months later, I went to the National Syrian Centre for Prosthetic Limbs (NSCPL) in Reyhanli to be fitted with my first prosthesis. That was an exciting and a distressing experience at the same time. I liked being there, I liked that I was about to have a chance to walk again, but I was affected by seeing so many other people struggling with their disability. I decided that I want to do something about this. I wanted to help these people, because I knew how they felt.

My first experiences with the prosthesis commenced and I was growing more interested in prosthetics and the functioning of the prosthesis as an aid to disabled persons. I grew more and more eager to help other users understand the same. I started working for the NSCPL centre and I began searching for instruction materials for amputees on the Internet.

I collected the video materials that I could find about this and started my Facebook page where I posted the videos and connected with other users and interested groups. I started creating instruction videos for prosthetic users myself and posting them on my FB page. I realised that I can use the modern technology to help other people with disabilities. I became increasingly involved in the work with patients as I started to train to become a prosthetist/orthotist. My future plans became more and more clear to me. I had a new dream to pursue.
Later on, I enrolled in a P&O Training Program that is hosted at the Ankara University. I could continue to work with my patients and progress professionally at the same time, because this program is taught online and we only have workshops once per module.
Today, I continue to study in the program and work 9 hours a day, 5 days a week, and I usually have 2 or 3 patients a day. I love my job because it enables me to work with people with disability, people like myself. It is challenging to study and work at the same time. Being an amputee adds to the level of challenge that I have to face daily. However, I know that this hard work will benefit my private and professional development and I pour all my energy into it.
For some time already, things that cannot be overcome by my efforts have slowed me down. Once again, I had to undergo a surgery on my leg due to developing infections.
It is a nuisance that left me without my prosthesis since May 2016. Standing on one leg while working is strenuous, but I will not give up. I need to wait for the wounds to heal and then I will have a new prosthesis. In addition, I already have a new dream. I dream about my new prosthesis being fit with a special prosthetic knee called “Genium”. As a prosthetist, I know what an amazing improvement this knee would be to my life. It would enable me to move more quickly, and to become more active once I am back in my prosthesis again. It would help me be more efficient in helping others. It would make it easier for me to pursue my professional goals and do my job more effectively. The knee is very expensive and I cannot afford it. But, it does not cost anything to dream. And, God willing, my dream will come true.”

by Emina Schlierf
0
February 18, 2018
Educational Projects for the World Syria

From Croatia: How Miloš's Education Changed Robert's Life Robert and Miloš met at the clinical…