WE REMEMBER OUR MENTOR SEPP HEIM

WE REMEMBER OUR MENTOR SEPP HEIM

Sepp Heim shaped the work and guided the path of Human Study development, and we see Human Study as being part of his legacy. Our organization would definitely not be what it is today, had we not had his valuable advice and selfless support throughout the years. We sought him in difficult situations, we turned to him as a child does to a parent, when everything becomes too much and you do not 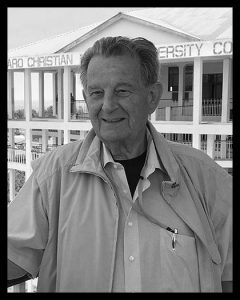 know which path is the right one. He was to us a perfect parent. He gave us room to learn and was always there in the background, just in case we needed a hand to hold on to.

Sepp Heim and Chris Schlierf met in Central America, back in 2001, four years before the latter founded Human Study. Both German, they shared views on many a point regarding development support and education in P&O profession, to which both had dedicated their careers. Their initial mutual respect and sympathy grew into a steadfast friendship, cherished by Chris in memory of his friend to this day.

Human Study family will remember Sepp Heim as a dear friend who had his way to get us to do what he wanted us to do, immediately. The evenings after the hard working days were sometimes seemingly endless, as his energy was. Way older than most of us, he outdid us in staying awake and talking about work and life and the rest of the world with such clarity and zest that we could not do else but respect and love him. The next morning, he would be the first in the breakfast room, asking if we have already finished what he told us to do the evening before.

It is hard to think of these days without feeling the lump of sadness swelling in the throat and tears welling up in the eyes. It is an honor to have personally known this great man. Making sure that Human Study continues on the path that Sepp helped pave for our organization is what we consider our duty in keeping his memory alive. He continues to live through each of our projects and every achievement we make. We remain eternally grateful.

Eulogy by our Board Member Dan Blocka, ISPO President from 2007 to 2010

I have often been challenged in my professional career but writing a eulogy for Mr. Sepp Heim, who has made such a significant impact on the lives and well-being of so many, is a very difficult task. His personal impact on me personally in terms as a colleague, mentor, father-figure and close confident is of the highest level. Expressing what needs to be stated to capture Sepp’s life and his impact on our professional area and ISPO itself is something hard to be satisfied with.

For those in the ISPO circles and in Prosthetics and Orthotics who are not yet aware, Mr. Sepp Heim passed suddenly at his home in Wangen, Germany on April 23rd 2019. The day before his 85th birthday.

As many know, Sepp Heim was an ISPO President from 2001 to 2004 and served the Society in varying capacities on many Committees, Planning Groups for Congresses and Courses and related for around four decades. He had a long and dedicated career in the area of Prosthetics and Orthotics that spanned over 60 years. He stayed engaged in the profession in varying capacities after his time on the ISPO Board (2007) and was always there for many of us who needed his counsel and advice. All that being said, I believe it important to express, from the ISPO perspective, his dedication and commitment to the Society was second to none. ISPO in the bigger picture, is a better place for all the contributions he has made.

Mr Heim’s history in the Prosthetic and Orthotic profession goes back to his teen years when he worked in his Father’s facility in Berlin. After completing his apprenticeship, Sepp looked to gain his independence and professional identity and worked for some time in Hildesheim, Heidelberg and Paris and was often accompanied by his good friend and colleague Gerhard Fitzlaff (past ISPO Board member). Soon after these occurrences, Sepp ended up working in Frankfurt and then attained his German Master in Prosthetics and Orthotics. Bringing things full circle, he then returned to Berlin to again work at his Father’s facility. I always sensed the difficulties Sepp had working with this Father and I believe this was also the reason he felt strongly he needed to go abroad as he did in the years that followed. I can remember at least a couple of times him expressing the large respect he had for this Father and telling me of these incredible stories about his Father’s career in the World War II era and the relationship his Dad had with the famous surgeon, Dr. Sauerbruch. Even though I am sure the relationship between Father and Son was contentious at times, I can still hear him saying in somewhat of a frustrated tone, “it’s because of my Father that I have to do the things I do”.

I believe it was in and around 1966, that Sepp decided to move himself and his family to Tunisia and there is no doubt this was the start of a string of events that lead to the incredible journey he would take forward and where his impact on ISPO manifested itself. He soon thereafter took on a position with the GTZ (translated as the – German Organization for Technical Cooperation) and it’s through this position his vision for the development of quality Prosthetic and Orthotic services in developing countries, through the delivery of standardized and recognized professional education, really began and was established. It was there in Tunisia where the first training center was formed with many more to follow through his own hands or through the others he mentored via his position with the GTZ. As a very interesting aside to the establishment of this training center in Tunisia, is that many decades later Sepp was a major influence in having the Human Study program establish a training program back in Tunisia. This program has been a great success in upgrading and training more Prosthetic and Orthotic practitioners in Tunisia at the ISPO standard.

Sepp’s work continued on other GTZ programs that were established in Togo (1974), Tanzania (1981) and then in Wuhan, China (1993). In that time frame, in 1987, he took on the position of the director of the BUFA program (Federal School of Prosthetics and Orthotics) in Dortmund, Germany for three years. Going forward Sepp was instrumental in his role with the GTZ in establishing further Prosthetic and Orthotic educational programs in Pakistan, Vietnam, El Salvador, Morocco and Armenia. Through this role Sepp mentored many colleagues and advised others that were in senior administrative and ministerial roles. To the end, he maintained his close relationships with former students and others he took under his wing. Many of them became significant leaders and role models in their own right.

I would be amiss not to mention the formal recognition and awards he received. Sepp was awarded the Order of Merit of the Federal Republic of Germany (Verdienstkreuz am Bande) in 1986, the Golden Bull award of the People’s Republic of China in 1996 and the Georg Hohmann Medal of the German Orthopedics and Orthopedic Surgery in 2001 in appreciation of his dedication to the field of Orthopedics.

Many of us in the ISPO circles all have all our own Sepp Heim stories and know the incredible impact this Man made on the Prosthetic and Orthotic world. I could tell many. Beyond what has been mentioned, I want to especially point to his insistence of having properly developed international standards, both at the practitioner and service levels. I watched him with my own eyes use those standards to convince various stakeholders and government officials they needed to raise the bar so those who required prosthetic and orthotic services would be able to rely on a care system that would provide a delivery system of standard and do so in a cost effective manner.

From my personal perspective, my own time with Sepp Heim, was an incredible 20 years plus journey where we together travelled to so many places pushing the ISPO agenda forward. Along the way I was taught so much about how to do this, take the lead, build proper relationships and encouraged to do so in my own way and style. At the same time, I was put in my proper place by Mr. Heim when needed. Through this time he prepared me well for my own ISPO Presidency. He was one of my main mentors and P&O Fathers and I will always be indebted to him for so much. What a great human spirit Sepp was and the legacy he has left for all of us needs to be carried on and taken further by the next generation.

One last part of this story that needs to be told is around the lifetime of support that Sepp’s wife, Imogen, unselfishly always gave around his family and professional life. This support was instrumental in Sepp being able to achieve what he did. Sepp is survived not only by his wife Imogen, but also his sons; Ekkehard, Winfried and Joachim, his daughters in law; Katrin and Susan, and also his two granddaughters; Caroline and Isabel.

To close, I remember fondly my last trip to visit him and Imogen at their home in south-west Germany in May 2018. We always had great conversations about so much and during this visit he once again said to me, “without engagement in life Dan, there isn’t so much to live for anymore”. This in itself epitomizes Sepp and who he was.

(This eulogy was published by ISPO here)